Best thing I ate this week: my first moqueca 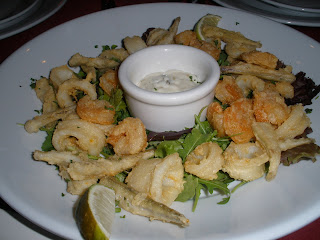 The best thing I ate this week was, well, pretty much everything I tried at Moqueca Restaurant at the Channel Islands Harbor in Oxnard. Not only did we love the food, but the atmosphere at Moqueca offered a nice change of pace. The dining room of this family owned restaurant is filled with vibrant artwork, and the service is refreshing.

Though not pictured, the risoles, made for a delicious appetizer. Little pockets of dough (think mini empanadas) were each stuffed with a single beautifully seasoned shrimp and deep fried until bronze like sun kissed skin. The crust was crisp on the outside, but really doughy on the inside...making them a joy to eat, especially when dipped in tartar sauce. We also tried the frito misto, an assortment of fried seafood, that came with a light yogurt sauce (pictured above). 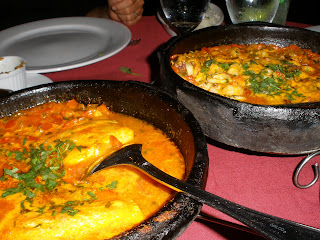 But the real showstoppers of the evening were the Caipirinha cocktails (the national cocktail of Brazil, made with cachaça, sugar and lime) and the moquecas. What is a moqueca, you might ask? Moqueca is a traditional Brazilian stew, made with tomatoes, cilantro, onion, olive oil, and seafood cooked slowly in a clay pot in the oven. 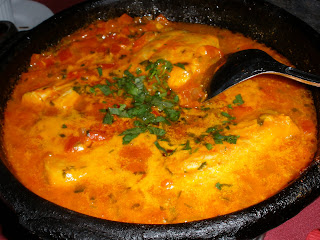 We opted for one moqueca with filled with fish, shrimp and calamari, and another full of chunks of mahi mahi. Our server told us they were enough for two to share, but three could easily enjoy one as well. The sauce was light and tangy, the seafood soft and tender from cooking in the sauce. We spooned it over glistening white rice and pirão (fish stock thickened with yucca flour), then added a few drops of hot chili oil, as our ever patient server instructed us to do.

There's something so magical about eating out of a rustic, clay pot; and something so refreshing about finding a high-end restaurant off the beaten path. This is one of those restaurants that the moment you leave, you are already thinking about when you will return and what you will order. For me, I'm already looking forward to going back for the bobo de camarao (a rich stew similar to a moqueca, but filled with shrimp and mixed with coconut milk).
Posted by Ventura Food Happenings at 2:17 PM