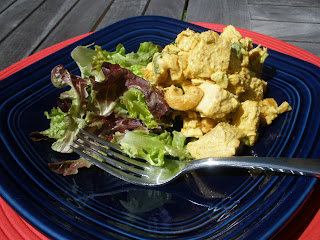 This week it was a craving that got me. The Food Network's Ina Garten was making a delicious looking curried chicken salad; and I'm not sure what it was, but it was all I could do to not run to the store that moment and get all the ingredients. I tried to shake it off, even sleep it off, but the next day I found myself in the store, gathering all the ingredients. Sure enough, it was as good as it looked on TV, and by far, the best thing I ate this week.

What makes it so good is that the chicken is cooked on the bone with the skin on, leaving it beyond moist and tender. The addition of the white wine and generous amounts of curry powder make for a sauce so good you'll be dreaming up other ways to use it all week long. The grand finale, the salty cashews, lend a happy crunch. We enjoyed it for dinner, and then lunch all week long. For now, my craving has been an satiated, but this recipe is a keeper for sure.

Preheat the oven to 350 degrees F. Place the chicken breasts on a sheet pan and rub the skin with olive oil. Sprinkle liberally with salt and pepper. Roast for 35 to 40 minutes, until the chicken is just cooked (Note: I baked mine for 50 minutes to make sure it was fully cooked and the juices ran clear). Set aside until cool enough to handle. Remove the meat from the bones, discard the skin, and dice the chicken into large bite-size pieces.

For the dressing, combine the mayonnaise, wine, chutney, curry powder, and 1 1/2 teaspoons salt in the bowl of a food processor fitted with the steel blade. Process until smooth.

Combine the chicken with enough dressing to moisten well. Add the celery, scallions, and raisins, and mix well. Refrigerate for a few hours to allow the flavors to blend. Add the cashews and serve at room temperature.
Posted by Ventura Food Happenings at 1:19 PM 1 comment:

Cooking with kids: A lesson in letting go Motherhood couldn't be more humbling. I can't even begin to list the gazillion things I swore I would never do as I parent, that I now find myself doing just to get a moment's peace (can you say Spongebob?). See, I thought I would be an amazing Mom. Silly me, I thought it would be easy, that I would be a natural. I was a good babysitter - didn't that mean I would be a knockout of a mama?
And then the babies arrived- two of them, both boys, about two years apart. And I realized they were sent to me to test every ounce of my patience and magnify all my little quirks and idiosyncrasies... oh, and to fill my heart with love and my life with joy, too!
One of the things I always dreamed of doing with my children was cooking with them. I was going to be one of those moms who cooks with her kids and gets them to fall in love with brussel sprouts and shrimp because we spend all this magical time in the kitchen together, wearing aprons, giggling, and bonding.
And then I tried cooking with a 3 year old. Not so fun. Germy hands in the batter, flour licked off the counter, and many a sneeze and cough thrown in as well. It bugged me for many reasons. I don't like mess, and I like being in control. Cooking with my kids was like the mirror being held up in front of my face. I couldn't help but look: it was glaringly obvious that cooking with kids was so hard for me because I didn't really have control.
Fast forward two years later and my youngest is five. Motherhood has gotten the best of me and I have slowly let go of that vice grip on control. And now the fun has begun. In the hours we have between when his preschool lets out and big brother gets off the school bus, the little guy and I bake treats and often work on that night's dinner. Apple bread, kale salad, and even braised lamb are among the dishes we've worked on together. He has his plastic knife, his own way of stirring, and both boys have now conquered cracking eggs (to be honest: it was hard to turn the control over on that one). We take turns pouring and sifting, and while they still insist on licking flour off the counter top (they think it is sugar), it doesn't quite bother me as much any more.
A few weeks back I overheard one of them say to my own mother, "I really love cooking with my mom." That just might be one of my proudest moments yet on this roller-coaster ride we call motherhood.
Posted by Ventura Food Happenings at 5:01 PM 1 comment: