I love me some pizza, pretty much every Friday night. And a girl can only do pepperoni or pesto so many times before her eyes and tastebuds begin to glaze over. So, this week I dreamed up this lovely pizza, and called it Pizza al Pastor. And it was the best thing I ate all week. 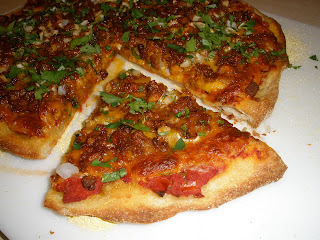 If you're starting to salivate, here's the recipe:

Drain can of tomatoes in colander or sieve. Leave pizza dough out at room temp for at least 20 minutes before rolling it out. Cook pork according to package directions (I think it tastes best when you do it on the stove, not the microwave) and let it sit while you get everything else ready. Preheat oven to 400 degrees. Roll out your dough, poke it a few times with a fork (so it doesn't puff up in the oven), and spread with a little olive oil. Bake for 6 minutes. Remove from oven, layer with tomatoes (which are your sauce), lots of shredded cheese, then the pork, and then a little sprinkling of the onion. Return to the oven to bake until brown (14-18 minutes). Let it sit at room temp for 10 minutes, then sprinkle with remaining onion and all of your cilantro.
Posted by Ventura Food Happenings at 7:25 AM