These are a few of my favorite things...

Since the dawn of time, I have been ordering the same ice cream every time I go to Baskin Robbins: Peanut Butter Chocolate. The chocolate ice cream is creamy and silky, and filled with thicker than thick swirls of chewy peanut butter (the texture is similar to that of caramel). The peanut butter brings that salty sweetness that only peanut butter owns.
But, last week, I went to Baskin Robbins, ordered the usual, and was surprised to see that, in my eyes, it had lost some of its luster. Why? Because I've found somebody new: 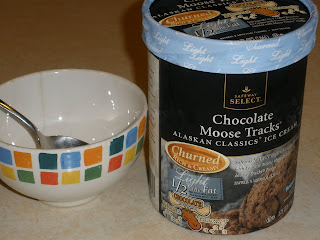 Yes, its Safeway Select Chocolate Moose Tracks (found at Vons stores here in Cali). It is made with a darker chocolate ice cream, and then filled (and I mean filled) with these thick fudge swirls. Now they aren't your traditional swirls, they are more like inch wide curved ribbons of dark chocolate. And, as if that wouldn't be enough, the ice cream is also generously speckled with miniature peanut butter cups that add the perfect amount of saltiness. When allowed to sit for 5-8 minutes at room temp before scooping and tasting (I know, the waiting is hard!), it tastes divine. Oh, and its one of those "light" ice creams, so you can eat even more. 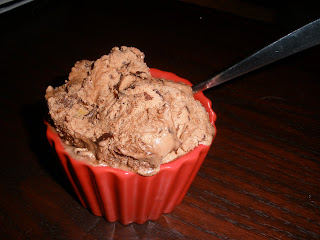 In addition to chocolate and ice cream, I love me some wine. And while my story in the Reporter a few months ago exposed me to some pretty nice, high end wines, I still love a good bargain, especially when it comes to my everyday wine. And given my love for wine and my tight grocery budget, I've tasted a lot of wines in the $4 - $6 range. And this, Trader Joe's Coastal Cabernet, is my favorite. Oh, and at $3.99 its one of the cheapest. Assuming you don't open your big mouth about its cost, your company won't even know, its that good! 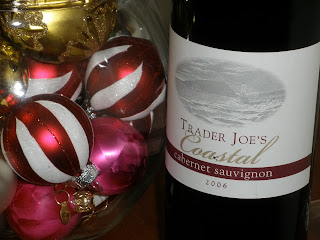 My last favorite is My Florist Cafe and Bakery in Ventura. Now, I went there a few times last year, and was never really wowed by their food or their service. But, earlier this week, I stopped in for some wine with friends and my very low expectations. And, I was actually wowed.
First, by their wine. Pretty much every day, they sell all their bottles at half-price. Now, if you buy a $60 bottle of wine (thats already totally marked up), its not such a deal. But, if you order one of the cheaper bottles, like the Zinfandel we chose (marked down from $38 to $19) it feels like a real deal. Second, I was totally impressed with the service. Our server was attentive, but gave us space, kept our water glasses full, and never seemed to mind that we were only having drinks. My third new happy favorite at My Florist is their Bread Pudding. It comes baked and warm in a generous bowl (the size of a cereal bowl), and is crammed with bread straight from their bakery. It was creamy and sweet, with chunks of soft and tangy lemon rind, and topped with a big scoop of vanilla ice cream. It was enough for the three of us to share and still feel like we'd indulged. Note: its not shown on their online menu.
Posted by Ventura Food Happenings at 4:51 PM