A new place to become a regular 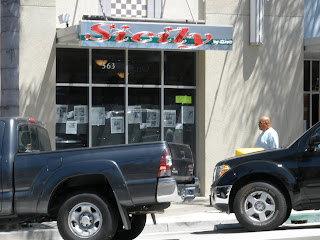 Well, after a long wait, we've finally got a new restaurant in downtown Ventura, Sicily by Gino. After months of preparation and anticipation, owner Gino Milano finally took town the butcher paper covering the windows and opened the doors on Friday. To see more about the process and what drove him to open a restaurant in this economy, check out the article I wrote for the Ventura County Star.

He will be running this latest creation alongside his wife, Connie Milano. While Gino has been working hard to get Sicily opened, Connie has been overseeing all the daily operations at their other restaurant, Cucina Isabella, in Camarillo. Perhaps it is their warmth, their wonderful European accents, or their business smarts, but it is clear that people are drawn to the Milanos and to their restaurants. Their passion for food and business is both palpable and contagious.

As for the food, their pizzas will be simple and fresh, utilizing the family pizza dough recipe they use in all their restaurants: water, yeast, flour, and a little oil and salt. They will serve pannini, Sicilian style pizza by the slice, homemade tiramisu and cannoli. One of the house specialties will be a Sicilian stuffed pizza called Scacciata. The unique fluffy dough, made with milk and a touch of sugar, will be filled with goodies like ricotta and spinach and other fresh ingredients.